Something incredibly amusing happened this week, whereby I spent my predicted monthly budget in a week. Yes, I have parted with a whopping £250 ish this week.

However, £100 of that is rent, for all of July. Unavoidable- a girl needs a bed and roof.

The rest is one might call an enormous ‘oops’ moment, and I explain it as the culmination of several ‘f*ck it’ moments.

The big one is a new phone, £100 ish. Mine got stolen last week and wah wah wah but it was killing me not to have one.

So thats £50 odd on living. That really is an oops.

If you really must know- and I’m sorry to share such details- something rather bad happened in my guts this week. That is, I dropped them. Repeatedly. I will divulge more below (literally), but suffice it to say that my appetite for cheap street food has come to a very undignified end.

Chiang Mai weekly budget #5: where did my clams go?

My bad, but I can’t do without a phone

My wonderful nan in England sent me some birthday money- £100- and I used that to buy a new phone. It”s a bit rubbish, because I would rather put the money to rent… but after getting my state of the art i-phone 4 stolen on my birthday (have fun with that technology, idiot), it was sort of unavoidable.

Judge me all you want for that decision, but running a blog and working online requires almost full-time devotion to the online world and social media. I tried to muddle by for a few days and just couldn’t do it. I got major FOMO at being unconnected,and dont even get me started on being apart from Google Maps. So whatever, I’m an evil ignorant millennial. We are all products of our time right? And a phone is so much more than a phone these days. Discuss.

Anyway, £100 bought me a 13mp camera phone running the latest android stuff. I bought a strange cheap Thai brand called a ‘Pro 5′, and its actually pretty wonderful. This is the first new phone I’ve had in YEARS, and it is making my online work so so so much easier I can’t even tell you. So thankyou, Gran (who struggles to work the VCR, so will likely never comprehend the extent of my gratitude).

Also, I paid my phone bill for the month- £8ish for 4.5gb of data and unlimted wifi at hotspots. Who wants to skype?

So let’s address that £50ish on random expenses…

As I said, it suddenly became very hard to stomach cheap street food, and so I have started spending more to eat at high-quality places. When I want to eat at all, which has not been much recently.

I figured I was fine, one month in. But apparently my body has officially decided: enough is enough.

Alas, I can only describe this week as an exorcism of the anus.

Such lexicon is likely why I’m single. Sorry boys, girls actually do poo. Rather enthusiastically, it turns out, when fuelled by the formidable spicy aggressions of Thai cuisine.

What does this have to do with budget?

Everything. You try eating 30 baht deep fried chicken (fried in what? A question one must never dwell upon) and clumpy dont-know-how-long-youve-been-sat-there rice… when you’ve been up at 3am every morning, for a week, staggering to the bathroom for earth shattering movements that scare you (sh*tless) with their machine gun ferocity.

Not just at home, actually. There have been times, oh so many times, that I have had to do the hideous clenched-butt-waddle across vast distances. It is a very unique slice of hell.

Only those that have suffered a similar fate will know what I am talking about, but there really is no decision quite like it. It’s literally a life or death conundrum- do I run for speed, or do I clench for protection?

The panicked result is a devilish mixture of the two, where one contorts their body with delirious spasms, breaks out in a cold sweat, and performs an inconspicuous clench-waddle-run; staggering to porcelain salvation in a montage of agonising convulsions.

Life on the edge, ladies and gents.

But it’s not all been grotesque. There has been much fun this past week, and I find myself wanting to spend more now I have a meagre freelance income. Cue some national park fun and some pre-lavish-brekky hikes!

And after that epic nature fix, I really REALLY need to write a proper update on my life here. There is one in the works, so stay tuned… I promise no more gruesome gastronomical sagas (the more expensive western food is working, as it happens, so I’m well on the mend).

This week: Smashing the freelance articles to earn next months rent. And staying away from chilli, obvs.

Who is the goer? 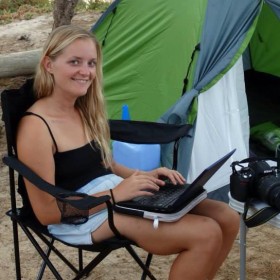 I'm Mel, a thrill seeker and British expat, proudly leading an alternative life of permanent travel since 2011. I'm a digital nomad and a serial seasonnaire; having travelled in 40+ countries and now living in my 7th, Thailand. There are a whole bunch of exhilarating ways I fund my patchwork life, so join me on my adventures and be inspired to just GO...

Where am I right now? Hello, is it me you’re looking for?