“You’re off to great places, today is your day, your mountain is waiting, so get on your way!”

I swear the older you get, the faster time goes.

Six months just slip by these days dont they. Like those epic nights out where you check your phone and its 5am, and youre all like ‘woah’ when did that happen.

Aw yes, time does fly when youre having fun.

Aaaaaand when youre shacked up in the Alps with THAT snowboarder running a chalet together. Gloat gloat gloat….

END_OF_DOCUMENT_TOKEN_TO_BE_REPLACED

Today is the day.

I’m about to do something reckless again…

This time it’s… run a Ski chalet with the other half AND live with him. For almost six months.

So I will start this post with a nice helping of NEGATIVITY, and a side of PESSIMISM.

END_OF_DOCUMENT_TOKEN_TO_BE_REPLACED When Spring sprang in the Alps

Typically, one associates Spring with fresh starts and new beginnings.

END_OF_DOCUMENT_TOKEN_TO_BE_REPLACED Hair of the Ski

Work, ski and sleep… that’s all we seem to do in Les Menuires.

Work, ski and party… that’s all we seem to do in La Plagne.

Three guesses which resort I prefer living in…

END_OF_DOCUMENT_TOKEN_TO_BE_REPLACED

Since December, over 100 different tongues have tingled with pleasure at the presence of my food. Or, more likely, too much chalet wine.

Either way… almost 3 months in… Where the time has gone literally baffles me.

END_OF_DOCUMENT_TOKEN_TO_BE_REPLACED Well I had a good excuse. I came out to do a ski season without realising the importance of slope fashion. Or the serious amounts of snobbery attached to being, and most importantly looking like, a seasonaire and not a ‘punter’. It’s pretty much the biggest insult we can give each other haha!

END_OF_DOCUMENT_TOKEN_TO_BE_REPLACED 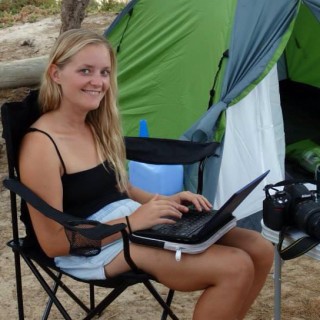 Hi, I'm Mel, a twenty-something Brit slowly working her way around the world. Since 2011 I've been a full-time digital nomad: I work abroad, I travel and then I write about it here to inspire you to do the same. I'll show you how you can fund your adventures as you go, and live the ultimate dream by travelling indefinitely!